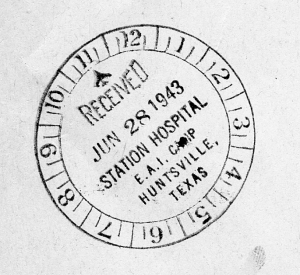 #TBT – In recent months the Newton Gresham Library has started to weed through the collection of books in the library.

This 1943 library stamp found in a book called, Stories for Men an Anthology by Charles Grayson, 1925, played an important part in the history of Sam Houston State University, Huntsville, and Walker County.

The seventy-four year old library stamp was used to identify books that were from the library of the Station House Hospital in the Enemy Alien Internment Camp, Huntsville, Texas. Commonly known as the Huntsville Alien Internment Camp or the Huntsville Prisoner of War Camp. Built in 1942 the camp held German POWs and later on Japanese prisoners of war. POWs and servicemen who were there were allowed to borrow books from the library while they were in the hospital.

In 1946, the camp was closed and then SHSU President Dr. Harmon Lowman acquired the camp, later reopening it to house returning veterans who would receive the G.I. Education Bill that enabled them to go to college or vocational school. Renamed, “Country Campus,” in 1946 the camp became a small city and housed classes for the Josey Vocational School. The “CC” had its own post office, church, baseball diamond, and food facilities.

The University owned the, “Country Campus,” until 1993. Country Campus was than purchased by a SHSU alumnus whose family was one of the original landowners who sold the land for the internment camp to the US government in 1942. A small plot of land donated by this same family to SHSU holds the university’s observatory used by students to observe the stars and night sky events. #SHSULibrary

Veterans Day is Wednesday, November 11, 2015. Thank you to all our veterans for keeping American safe and free.

Sam Houston State University has a long history of men and women joining the armed services in times of war and peace. From the Spanish-American War to the current conflicts Sam Houston State students and alumni have always stepped up to do their duty.

The above photograph and letter comes from a page out of a scrapbook of World War II newspaper clippings and photographs that relates to Sam Houston State Teachers College students, faculty, staff, and Walker County community members who served during the war. This oversize scrapbook has no information as to who gathered the materials or created the scrapbook.

The young man on the far right camel is Lt. John H. Jenkins who graduated from Sam Houston State Teachers College in August 1941 with a Bachelor of Science degree. This photograph was taken in Egypt as evident from the camels, pyramid, and the Sphinx in the background. It too has an unknown date and photographer.

To see more of this scrapbook and other items relating to veterans come visit the SHSU University Archives, room 400, Newton Gresham Library. The archives are open M-F, 8-5.

The USO (United Service Organizations) Clubs in WWII were a major component of keeping morale up for those in the military, along with their dependents. From java hour, to wives craft club, to a class called Ball and Chain for military couples, to basketball at Paris Jr. College there was something to keep everyone occupied.

This 1944 USO Club program bulletin is from Paris, Texas. The bulletin is part of the Melvin Mason Collection. Dr. Melvin Mason taught English here at Sam Houston State from 1962-1991. In he was drafted into the Army from Roxton, Texas and sent to Chicago for training. WWII ended before he was sent overseas.