These images of the SHSU Homecoming in 1966 are from the University Archives.

Fifty years ago rain poured down on Pritchett Field as the BearKats battled in the mud to defeat the East Texas Lions. The BearKats fell to the Lions 17-14.

Scroll down and enjoy a look at the past….

The traditional bonfire was followed by a pep rally. (later it would become known as FireFest!)

Sammy the BearKat like most Kats doesn’t like the rain. Note how much difference 50 years makes in the image of our beloved Sammy BearKat.

It’s time for the 101st season of BearKat Football!

Come this Saturday the BearKats will be back on Bowers Field to meet the Oklahoma Panhandle State Aggies. This game will be the annual BearKat, “Orange Out,” so the stadium will be covered in a sea of orange, white, and blue. 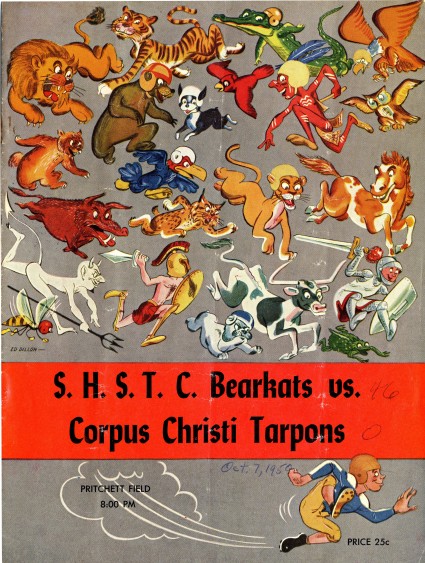 In this 1950 game, Sam Houston State Teachers College BearKats played the University of Corpus Christi Tarpons. The game was a blow out with the BearKats winning 46-0. The BearKats have a 6-0 and 201-32 points scored record against the Tarpons from 1950-1965. Two school records were also set in these games. The first in 1954 for the 11th longest pass of 81 yards for a touchdown thrown by quarterback Allen Boren to Bobby Baldwin. The second record was the 9th longest punt return of 70 yards for a touchdown set by Tommy Luker in 1964.

Special thanks to the Mary and Jeff Bell Library, Special Collections Department, at Texas A&M University-Corpus Christi for the history of their football program and Tarpy the Tarpon.

To see this program and many other BearKat football programs from the past 100 years come visit the SHSU University Archives, room 400 of the Newton Gresham Library. 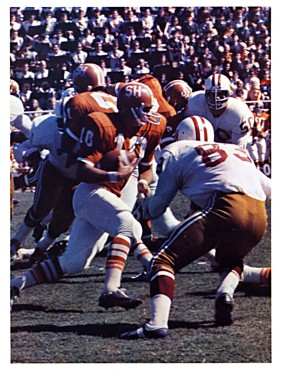 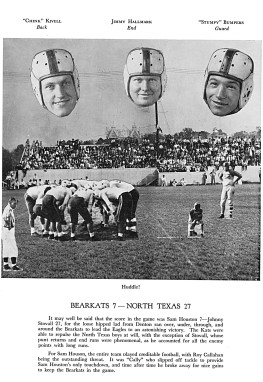 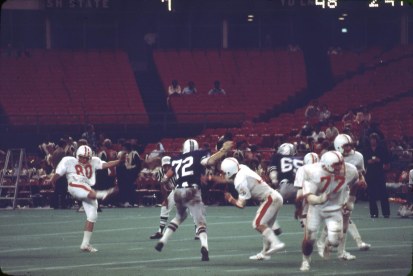 Here in the University Archives we have looked at or scanned what seems like thousands of football related newspaper articles, photographs, and yearbooks during the 100th season of BearKats football.

So in this post the University Archives decided to pull out some favorites of the images and put them in one posting. See below for details about the images.

Row 2 – Members of the Sam Houston Normal Institute first football team in 1912 line up to reenact their formations. Among them is Len Baldwin who is said to have made the first touchdown in University history.

Row 3 – Left – Frank “Foxie” Fox jumps for joy as the Kats score against Concordia in the NAIA National Playoffs in 1964. Also showing excitement are cheerleaders Janet Miller and Rick Stowers. The game was a tie at 7-7.
Right – Go Sam Houston! The BearKats run for a touchdown in 1969.

Row 4 – Left – In 1983 Senior Ricky Beck gives his opinion of the BearKats chances in the game.
Right – In 1937 BearKat football was a welcome reprieve from the end of the Depression. In this picture from the 1937 Alcalde, the athletics photographer gets creative with the image. Note the Old Main Building spires in the background. This game was played at Pritchett Field.

This booklet featured above is called, “From Coach to You,” and was done by new Director of Athletics and football Head Coach Paul “Red” Pierce in 1952 to introduce himself and the athletics program to the freshman students. Coach Pierce came to Sam Houston State in 1952 from his alma mater Sul Ross State Teachers College in Alpine, Texas.

While at Sam Houston State, Red’s BearKats won or tied for four conference championship in 1955, 1956, 1961 and 1964 and played four bowl games. In 1964, the BearKats shared the NAIA National Championship title with Concordia College with a final score of 7-7. The bowl games the Kats won during his tenure as head coach were the Shrimp Bowl, and two Refrigerator Bowls in 1953 & 1956. They also played in the 1958 Christmas Bowl but were upset by Northwestern State.

In 1978 Coach Pierce was inducted into the BearKat Athletics Hall of Honor. 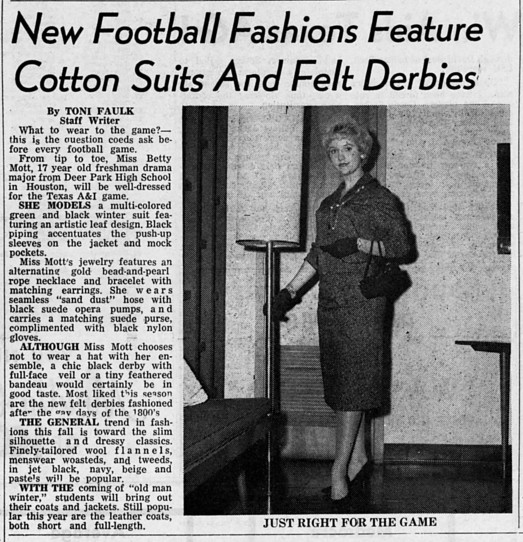 It’s the annual “Pink Out” game this weekend. Everyone wear pink and support the search for a cure for breast cancer.

Deciding what to wear to the Sam Houston vs.Texas A&M Commerce game on Saturday will be a no brainer. But back in 1959 The Houstonian decided to give female football fans a few helpful hints on the latest football fashion. This clipping is from The Houstonian, October 24, 1959.

To see more football fashion in the SHSU yearbook, The Alcalde, or copies of The Houstonian come visit the University Archives, room 400, Newton Gresham Library. 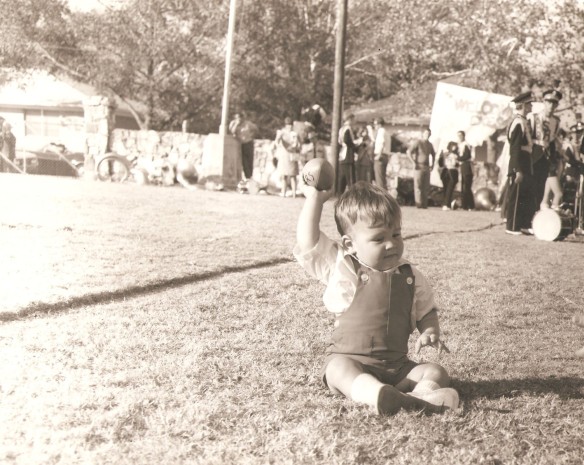 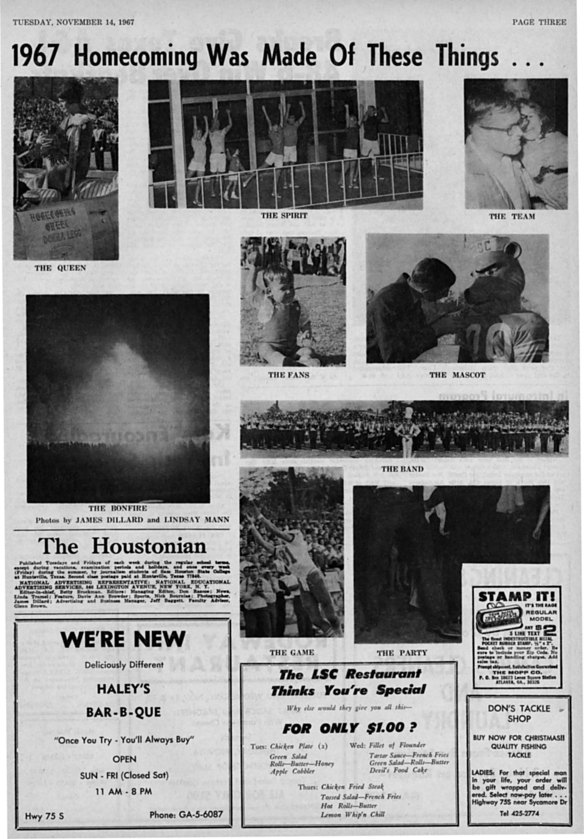 Homecoming Week! Since the mid-1940s Homecoming as we known it today has been a big deal on the Sam Houston State University campus. With all the festivities, electing the Queen and King, and most importantly THE BIG GAME there will be fun for all. This year we take on Nicholls State and have a record of 6-0 against the Colonels.

This week University Archives would like to introduce you to the cutest BearKat Homecoming fan. His name is Chris Gilstrap. Chris was destined to be a BearKat from an early age. His father Michael was a student (alum 1968 and life member of the SHSU Alumni Association) and his mother, Barbara, worked for Dr. George Killinger, who was involved in starting the Criminal Justice program at the same period of time this photograph was taken at the 1967 Homecoming game between Sam Houston State College and Texas A & I. Sad to say we lost that game 48 to 6, but gained this adorable photograph to feature in this post 48 years later.

The game was played at Bedrock Bowl or Old Bedrock, also known as Pritchett Field. Little Chris was getting bored so his father decided to take him out of the stands and entertain him on the sidelines. Chris’s picture was shot by a Houstonian photographer and he appeared in the November 14, 1967 issue of The Houstonian.

Many thanks to Michael Gilstrap for letting the University Archives use this picture.

To learn or see more materials on Homecoming activities come visit the University Archives in the NGL, room 400.

Over the years, The Houstonian, has featured many cartoons within the pages of the 102 year old newspaper.

This football fun cartoon from the September 26, 1972, Houstonian, is an example of the work of the cartoon artist known only by his or her signature of Rowland. Rowland’s many cartoons throughout the fall of 1972 and spring of 1973 issues of the Houstonian feature an accurate caricature of the people and attitudes of the day on the Sam Houston State campus.

Come and see more of Rowland’s cartoons in the University Archives in room 400 of the Newton Gresham Library.

It was 55 years ago that the Sam Houston State Teachers College BearKats beat Lamar at home in a 45-0 blowout. With this non-conference game the Kats won 4 games in a row. A feat the previous year’s teams failed to do. The Kats would go on to win 5 and lose 5 and end up 3rd in the Lone Star Division.

Clipping from the sports page of The Houstonian, October 18, 1950.

Special thanks to the Sam Houston State University Athletics Football records book for providing University Archives with all the football stats the archives could ever need.

Click this link for the SHSU Football records book pdf.

In our 100 years of football history the BearKats have shared their athletics facilities with professional and semi-professional teams. The most recognizable team that has used the SHSU athletics facilities would be The Houston Oilers. The Oilers held practice camp on the Sam Houston Campus every summer from 1974-1977. In 1978 the Oilers choose to move their summer camp to Stephen F. Austin University when Sam Houston State decided to start classes in mid-August.

The Oilers showed up on campus in the summer of 1974 with a long list of requests for modifications to the SHSU athletic facilities that only professional football players would need such as bigger beds, specific dietary requirements like prime rib and ice cream every night, a Nautilus room and oversize towels.

The photograph above is from The Houstonian, 8/6/1976.  If anyone can identify these Oilers players university archives would love to hear from you.

To learn more in-depth information about when the Oilers came to Sam Houston State University visit the University Archives in room 400 of the Newton Gresham Library.