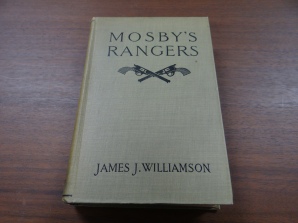 This book, “Mosby’s Rangers” is a compilation of information from James J. Williamson about the exploits and methods of John Singleton Mosby. This book has information as well about the men he was commanding.

John Singleton Mosby, a Confederate States of America Army Calvary Battalion commander, was the Ranger who “made the first circuit around the Federal army while in front of Richmond, thereby enabling General (J.E.B) Stuart to make his celebrated raid around the entire army of General McClellan.” (Page 15) This book gives detailed information on both Mosby and his Rangers’ deeds and hardships.

There is an entry that shows Confederate States of America President Jefferson Davis and Robert E. Lee giving Special Order No. 82 to Mosby. These orders gave Mosby the rank of Captain in light of his exploits and deeds. With this, they mention at the very start men that had joined Mosby after their exchange as prisoners. These men were volunteers and started the term “Mosby’s Men”. The men he had been given by upper command were sent back after he gained enough volunteers. His first detail of men had been 15, names of which are given on page 18.

Many other interesting things had been written down, including how these men set up while off duty. They had no tents and so they would use the farm homes and other structures that were near the Potomac River. When they needed to meet, they had rendezvous at set locations. If none were set, then couriers would be sent out as needed when they saw an opportunity for an operation. When it was done, they would scatter, making it difficult to catch them! From the Union side, it was “like chasing Will-o’-the-wisp.” (Page 19)

Transcript of letter from Ella Scott to Jane Inglis

The Mae Wynne McFarland Research Collection is composed of five series: Personal Materials, Walker County/Huntsville, Texas History, War of 1812, and Women and Charitable Organizations. Although each series has interesting points, the most interesting, in my opinion, can be found within the Texas History series.
The Texas History series holds ten boxes of information on subjects such as the Texas prison system, early Texans, and several Texas counties. Amongst this variety of topics, are copies of letters from people who lived and fought during the Civil War. Most of the letters concerning soldiers are accompanied with biographical information.

One interesting set of letters is from Ella Scott of Waverly, Texas to Jeanie English of Montgomery, Texas. While only Ella’s side of the conversation is available, much can still be learned about the mindset of youth during this time. For one letter in particular, Mae Wynne McFarland notes that she didn’t copy it for historical value, but rather “to show that the youthful feminine was the same as today and that ‘war and rumors of war’ had not altered the girlish outlook at that time.” This idea is portrayed throughout the letters, as most are filled with gossip of marriage and engagements of mutual friends of Ella and Jeanie. Ella confesses that she would have to wait until after the war to wed because she wanted a war hero for a husband.

Another letter is just an example of similar stories men dictated on paper to loved ones back home. It is a letter from Charley Waters to his father, Mr. P. B. Waters. Charley describes several points of fighting and rest, mentioning that he was even able to aid three wounded comrades. Exhaustion and uncertainty consumed the men, regardless of rank. Mae Wynne McFarland was able to obtain a copy of this particular letter from Mrs. E. W. Bragg, the sister of Charley Waters, and her granddaughter Mrs. Philippa Kynette. 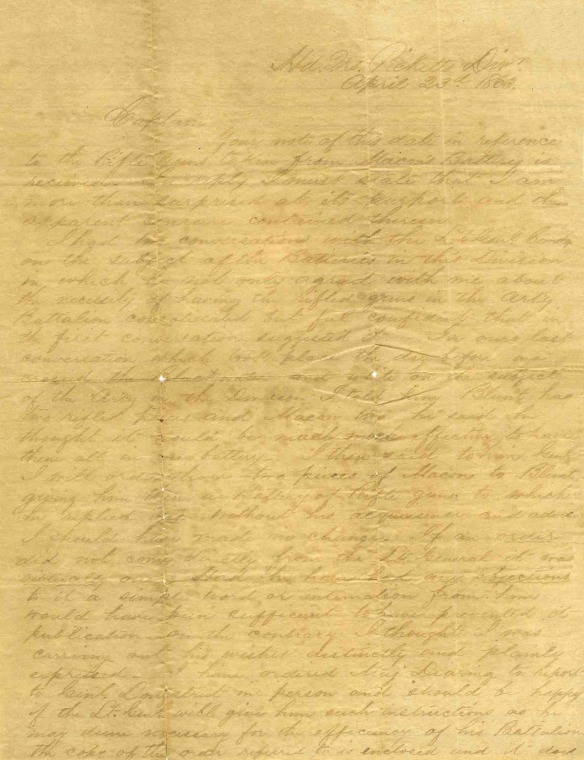 This is a letter from George Pickett to Thomas J. Goree of Huntsville, TX. George Pickett, famous for leading Pickett’s Charge at Gettysburg, wrote to Goree, discussing a disagreement the two had concerning the assignment of rifles to a certain battery.

Your note of this date in reference

to the Rifle guns taken from Macon’s Battery is

received.  In reply I must state that I am

more than surprised at its purport and the

I had two conversations with the Lt Genl Comdg.

on the subject of the Batteries in this Division

in, which, he not only agreed with me about

the necessity of having the rifled guns in the Art’y

Battalion consolidated but feel confident that in

the first conversation suggested it.       In our last

conversation which took place the day before we

crossed the Blackwater, and while on the subject

two rifled pieces and Macon two, he said he

thought it would be much more effective to have

them all in one battery.    I then said to him Genl

I will order those two pieces of Macon’s to Blunt

giving him then a Battery of Rifle guns to which

he replied yes. Without his acquiescence and advice

I should have made no change.  If an order

did not come directly from the Lt. General it was

virtually one.  Had he have had any objections

to it a simple word or intimation from him

would have been sufficient to have prevented its

publication.  On the contrary I thought I was

carring [sic] out his wishes distinctly and plainly

expressed.   I have ordered Maj Dearing to report

to Genl. Longstreet in person and should be happy

if the Lt. Genl. Will give him such instructions as he

may deem necessary for the efficiency of his Battalion.

not appear that the Lt. Genls name is mentioned.

To see other examples of the Goree Collection, go here: Goree Family Papers

Thomas Jewett Goree was born in Alabama on November 14, 1835.  The Goree family moved to Huntsville, Texas and lived on a plantation near the Trinity River.  Goree went to war in 1861 and served under General James Longstreet.  Thomas J. Goree promoted to Captain and served as aide to Longstreet throughout the war.  He and Longstreet became good friends and remained in contact with each other after the Civil War ended.  In 1868, Thomas J. Goree married Eliza Thomas Nolley and moved to Midway, Texas to run a mercantile business.  Thomas and Eliza returned to Huntsville in 1873 where Thomas J. Goree practiced law in Huntsville until 1877 at which time when he accepted the position of Superintendent of the Texas Prison at Huntsville.  Later, Thomas Jewett Goree became Superintendent of Penitentiaries.  Thomas Jewett Goree died in 1905.

The Goree Family Papers consists of documents, correspondence, articles, and photographs concerning the Goree family of Walker County, Texas.  The majority of the collection is the original correspondence of Thomas Jewett Goree who served as aide to General James Longstreet during the Civil War.  The collection also includes the correspondence of Eliza T. Nolley and E.K. Goree.  Eliza Thomas Nolley was an early settler of Walker County and was one of the first teachers at Andrews Female College. The Goree Papers contain transcribed correspondence of Thomas J. Goree, Eliza T. Nolley, and various other members of the Goree family including a transcription of Thomas J. Goree’s brother-in-law Dr. Pleasant Williams Kittrell’s private journal.  The Goree Papers hold numerous photographs and negative images of members of the Goree family.

This letter comes from Brigadier General John Gregg, a confederate general who fought in a number of battles including the Battle of Chickamauga, Battle of the Wilderness, and Battle of Cold Harbor. Gregg commanded the famous Hood’s Texas Brigade at … Continue reading →