Joanne Kyger’s poetry had hints of Zen Buddhism, Black Mountain, San Francisco Renaissance, and Beat poetry. Even with her diverse set of influences, she is most often associated with poets of the San Francisco Renaissance and the Beat movement.
Joanne Kyger was born on November 19, 1934. She studied at the University of Columbia and almost got her degree, but instead she moved to San Francisco in 1957. Once in San Francisco she moved into a communal housing establishment for students of Zen Buddhism and Asian studies. Not long after moving to San Francisco Kyger became involved with the poetry scene around Jack Spicer and Robert Duncan. These two poets were best known for their involvement with the San Francisco Renaissance. In 1958 Joanne met Gary Snyder. In 1960 she went to Japan with him, and on February 28, 1960 the two married. She travelled to India with Gary Snyder, Allen Ginsberg, and Peter Orlovsky. Ginsberg and her husband were both Beat poets. In 1965 Joanne Kyger and her husband Gary Snyder got divorced after being separated for a few years. Later in 1965 Joanne Kyger married Jack Boyce, the two separated in the early 70’s.
The Newton Gresham Library has a few of her poems in SHSU Special Collections Wild Dog collection. Places to go and Stump Island, along with Kora Grown Old, a poem dedicated to Kyger, can be found in Series one, Subseries 1, Box 1, Folder 44 of the collection. Places to go can also be found with the manuscripts in Series two, Subseries 1, Box 5, Folder 18, and as the final version in Series 2, Subseries 4, Box 9, Folder 4. She come up can be found in Series 2, Subseries 4, Box 9, Folder 4. Joanne Kyger still writes some today. In addition, she also teaches at the Jack Kerouac School of Disembodied Poetics on occasion.

To view and read poems by Joanne Kyger and The Wild Dog Papers visit Newton Gresham Library’s Special Collections on the fourth floor of the Library. 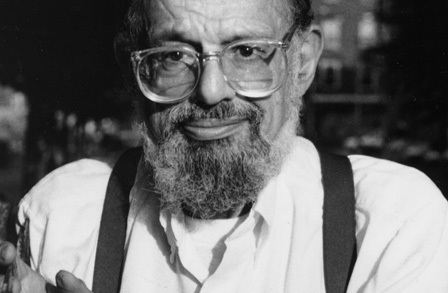 Allen Ginsberg, born June 3, 1926 to Louis and Naomi Ginsberg, was a famous and popular Beat poet. Interestingly Ginsberg’s father was a writer and his mother was a member of the communist party. His mother also had an undiagnosed mental illness which led to her death via lobotomy. Ginsberg’s career as a Beat writer had its start his freshman year at Columbia University where he befriended future Beat authors Jack Kerouac, William S. Burroughs, and John Clellon Holmes. Ginsberg, Kerouac, and Burroughs would become pivotal figures in the beat movement. Ginsberg was a voice in many political movements such as: free speech, Vietnam War protests, Gay rights, he supported drug use, and brought attention to Bangladeshi war victims. His political activism led to many arrests and even a stint in a mental institution for hiding stolen goods for a friend. He dated many men, one of which was William Burroughs. Ginsberg’s most notable and lengthy romantic relationship was with Peter Orlovsky. Their relationship lasted over 30 years, and even if they were on breaks they remained friends.
Ginsberg’s first major piece of Beat poetry is called Howl. He used his study in Eastern religions in his poetry through mantras, rhythm, and chants used for spiritual effects. His poems Who Will Take Over the Universe, which talks about protest and his view of government, and a poem titled simply From Journals-1963 , which is a funny piece about an alcoholic telling his wife how he wants his funeral to go, can be found in the SHSU Special Collections Wild Dog Collection. Who Will Take over the Universe can be found in, Series 2, Subseries 4, Box 8, Folder 6 page 31, for the published clean copy. A second, annotated copy can be found in Series 2, Subseries 1, Box 5, and Folder 5. From Journals-1963 can be found in Series 2, Subseries 4, Box 9, and Folder 4 on page 14. Like the first poem a manuscript version of the second can be found in Series 2, Subseries 1, Box 5, Folder 18. 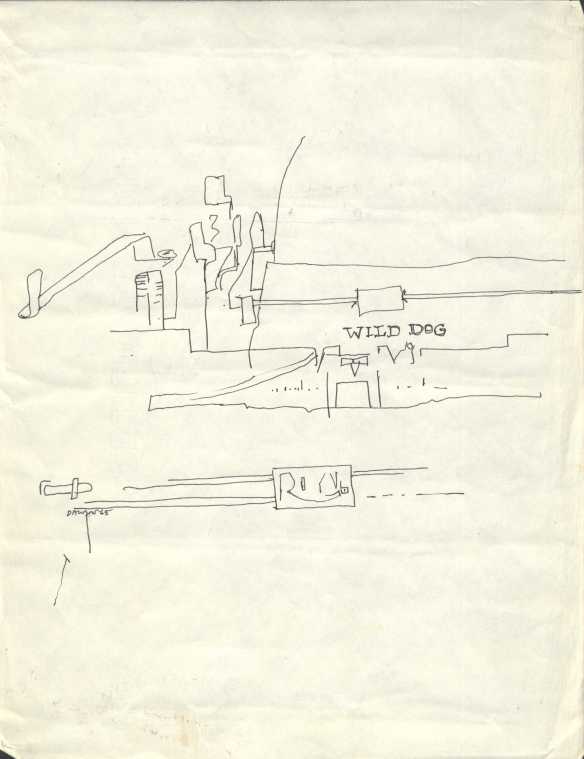 Ginsberg continued to produce great literary works throughout his life, win awards, and perform readings up until the last months of his life. He died on April 5, 1997 surrounded by friends and loved ones.

To view and read poems by Allen Ginsberg and learn more about The Wild Dog Papers, visit Newton Gresham Library’s Special Collections on the fourth floor of the Library.

For the months of June and July, Out of the Box will be highlighting the Wild Dog Manuscript collection. Each article, written by SHSU Special Collection intern Kara Stafford, will highlight material from the collection and the authors who contributed to the literary magazine.  Enjoy!

The Wild Dog magazine is a literary magazine featuring Beat poetry. Beat poetry is mostly free verse poetry, it is often surrealistic. It was influenced by the cadences of Jazz as well as Native American and Zen spirituality. The Beat movement started in the 1950’s on the east coast; New York mainly. The core of the wild dog movement was Jack Kerouac and Allen Ginsberg. It later moved to the West Coast and San Francisco was the hub of Beat poetry by the 1960’s. Many Beat writers struggled to be published at first, because they did what they were told not too or were seen as “weird.” Many Beat poets got their start writing for The Wild Dog, a campus literary magazine started in Pocatello, ID. Beat poetry sees uncensored, authentic human thoughts as art and this is what made the movement and poetry so interesting.

The picture shown above can be found in The Wild Dog Collection, Series 2, Subseries 2, Box 6, Folder 20