On May 21, 2015, SHSU archivists James and Felicia Williamson presented at the Society of Southwest Archivists annual meeting in Arlington, TX. The topic was “3 Steps to Maximize Your Social Media ROI.”  Felicia and James discussed and demonstrated several successful marketing strategies for promoting archival collections.

Felicia Williamson discussed how SHSU was able to create a simple workflow using daily descriptive practices to create social media posts to promote finding aids and archival collections. She described how processing archivists in SHSU Special Collections have incorporated planning and executing social media posts into the daily work of processing by keeping a look out for visual material to scan for each collection’s post. The process is further streamlined by using the scope and content note and the biographical note found in the finding aid as the backbone of every social media post that is then linked to the Archon finding aid. She also discussed how to tailor these posts to the various social media sites.

Turning a finding aid into a social media post

James Williamson discusses the use of GIFs (graphic interchange format) on social media and how people can take materials in their archival collections and turn them into fun or interesting GIFs that can be spread throughout the web.  The success of archival GIFs have allowed SHSU and many other institutions to reach new audiences and attract new followers.

Steps to creating a book GIF

During James’ presentation on creating GIFs, James created an animated GIF, a book GIF, and a video GIF, demonstrating the necessary steps for each example. This was especially fun and challenging due to the power outage at the hotel!

Teaching how to make GIFs with no power!

The presentation generated a great deal of positive feedback at SSA and we are happy to share the PowerPoint, which can be viewed at the link below.

If you any questions about the presentation, please feel free to contact James Williamson (jwilliamson@shsu.edu) or Felicia Williamson (fxt004@shsu.edu).

Global Stability by Gerald R. Ford was the tiniest book in the library for a number of years till someone decide to actually measure the recent acquisitions. While no longer the tiniest, this tiny treatise from our former president remains a wonderful oddity in our collection.

Who knew the answers to world peace only need a couple of pages in tiny print?

This John W. Thomason drawing from our collection looks good enough to eat.

On April 21, 1836, General Antonio Lopez de Santa Anna and the Mexican army were defeated at the Battle of Jacinto by the Texas forces led by General Sam Houston. After the battle, Santa Anna tried to elude capture by dressing as a common soldier, but was soon discovered when prisoners saluted their leader. A few weeks later, Santa Anna signed the Treaty of Velasco and removed his troop from Texas.

It was during this time that someone took possession of a saddle and bridle belonging to Santa Anna that found its way into the hands of Sam Houston. There are two versions of how this happened, and they are both based on eyewitness accounts.

The first version of the story says that sometime after the Battle of San Jacinto, Santa Anna presented the saddle and bridle along with other items to Sam Houston. The second version tells a different story. After the battle, items were seized as spoils of war including a large sum of money. This money was divided up amongst the soldiers who used the money to buy the belongings of Santa Anna and others in an auction. An unknown individual purchased the saddle and bridle and gave the items to Sam Houston sometime later. Whether either story is true is up to debate.

*A big thanks to Mikey Sproat from the Sam Houston Memorial Museum for his help with this story!

Sam Houston battles it out with the Rice Owls in this game from 1993. It was a close one but Sam Houston came up short with a 13-14 loss. Sam Houston and Rice faced off numerous times in the 1920s , but this game marked only the second time the teams had met since 1948. Sam Houston has not faced off with Rice since. Rice leads the series with a whopping 16-1 record against Sam Houston State.

This clip was taken from footage donated by SHSU Athletics to University Archives.

If you would like to own a personal copy of this game, it, along with numerous other games, can be purchased at this website:
GoBearkats.com Multimedia Store

All of the Sports slides have now been digitized, and some of them are already appearing on the Sports @ Sam tumblr (shsusportscoll.tumblr.com), which will continue to update twice a week with more photos. While creating Sports @ Sam, I learned a lot about the different ways that institutions can use social media outlets such as tumblr, facebook, and twitter to connect with other institutions, patrons, and the community. Making collection-specific social media sites, such as the Sports @ Sam tumblr page, can create interest and promote the institution (both the Archives and the University) while also providing examples of what students or researchers can find in the special collections and University archives, so that the next time a student has an assignment or a researcher/faculty is considering a new topic, they might be reminded to come by the Thomason Room or the Archives department and see what is available.

Moving forward for my final week here as the Special Collections and University Archives Intern, I have been preparing a physical display which will also draw heavily from the Sports slides collection, much like the Sports @ Sam tumblr. The display will showcase SHSU Sports history, using prints from the Sports color slides and also incorporating some older photos, dating back to the 1910s. The bulk of the preparation went into creating a poster for the display and writing captions for all of the prints. Next week I’ll provide photos of the display and provide more details about all of the different elements as they come together.

As my summer internship draws to a close I have been thinking about all of the skills I’ve acquired and all I’ve learned through the experience of processing and displaying this collection, and I feel that I’ve gained a wealth of knowledge about the different departments (Special Collections/Thomason Room, Archives, and Digital Resources) which work together to preserve and provide access to all of the rare and unusual documents and items that we have here at Sam. I feel that the experience I’ve had here will be very valuable for me in the future, and I also hope that the work I’ve done will be useful to others as well.

We are proud to announce a new Tumblr webpage created by the SHSU Special Collections and University Archives Departments’ intern Amanda Chang, which spotlights SHSU Sports teams from seasons past. The “Sports @ Sam” Tumblr updates each Monday and Friday with a new photograph showcasing athletes from the 1980s, ‘70s, ‘60s, and beyond. Many of the photographs come from a recently digitized collection of color slides dating from the late 1960s to the early 1980s, which feature mostly baseball, basketball, football, golf, and softball photographs. The slides were originally created by the Sam Houston News Bureau in 1970s and the Sam Houston Public Information Office in the 1980s. Along with these photographs, older archived photos will also be posted.

Athletes have been playing for Sam Houston State for over 100 years, starting out as the “Normals” when SHSU was known as a Normal Institute, and later switching to the “Bearkats.” Throughout the years our sports programs have developed into the strong teams which represent our University today. Our sports programs have grown along with the University, and this is reflected in many of the photographs that will be posted on Sports @ Sam. Not only do these photographs feature the athletes themselves, but also the fields and gymnasiums, and later stadiums and coliseums, that each team called home.

Sports @ Sam offers an opportunity to look back on the teams that created a solid foundation for today’s student athletes. Sports @ Sam can be found at shsusportscoll.tumblr.com or, and the Special Collections and University Archives Departments’ Tumblr can be found at nglspecialcollectionsandarchives.tumblr.com. 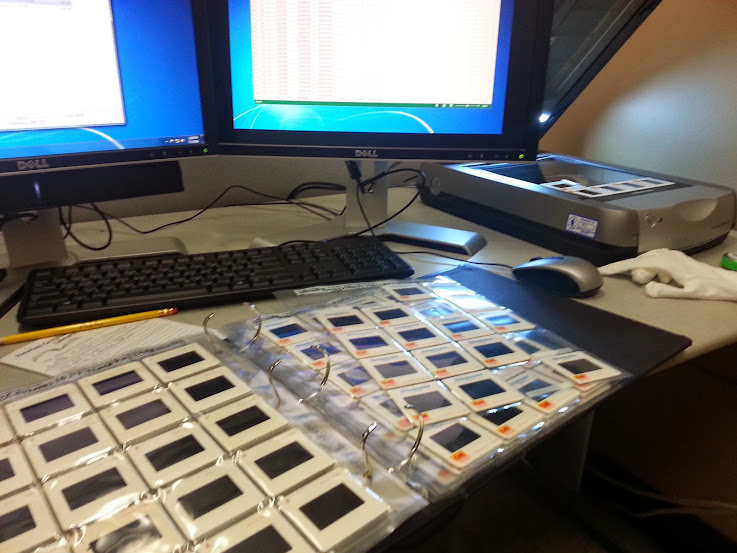 After researching the history of the different athletic teams and events pictured in these slides in the Thomason Room and the University Archives, I’ve moved on to the Digital Resources Lab to digitize the slides. The first step to digitizing involves scanning the slides, followed by editing them in Photoshop and then saving them in a properly labeled and organized file system within the special collections drive. 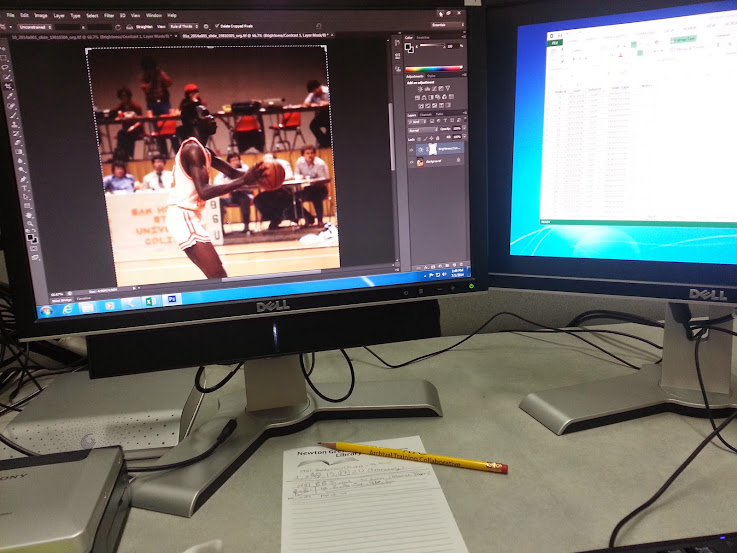 Once all 400 or so slides are scanned, edited, and filed away my next task will involve designing a social media-based online display for them, where they will be made viewable by the public. The online display will serve the dual purposes of showcasing the photos and informing viewers about the history of various sports at Sam while also helping to promote the University Archives and the Thomason Room.

In addition to the online display, I will also create a physical display including a few of my favorite sport photos, as well as some selected books, in the Newton Gresham Library. After that display is completed I will take pictures and post them here as well.

Scanning the slides has been interesting, since it is the first time I’ve been able to view the photos up close. Sometimes this means I can see that I got something wrong the first time around, like when I found that quite a few of the slides I thought were baseball photos were actually softball photos. The digitization process has afforded me the ability to go back through the collection a second time for a closer look and allowed me to fix mistakes like that. I’ve also had the opportunity to gain experience using Photoshop to help clean up the slides, which are often a little scratched and dusty.

I’ve gained a lot of experience through processing this collection over the past month or so, and soon I’ll be ready to put what I’ve learned on display for others to see. I look forward to displaying these photos for others to view.

On June 06, 1944, the largest amphibious landing in history occurred off the beaches of Normandy, France. News of the landing traveled throughout the US in radio broadcasts and newspaper headlines. This is how people in Huntsville, TX received … Continue reading →